This website is all about the Indian TV series called Siya Ke Ram. Siya Ke Ram is the classic epic of Ramayana retold through the eyes of the righteous, beautiful and brave Sita and her immense love for Ram! Watch full episodes of Siya Ke Ram, only on Hotstar.

The Male in picture is Rama (or Ramachandra) is a Hindu God. He is the central figure of the Hindu epic Ramayana, which is the principal narration of the events connected to his incarnation on earth, his ideals and his greatness.

The Female is image is Sita (also spelled Sîta, Seeta or Seetha, also known as Vaidehi, Janaki, Maithili or Bhoomija, she is the central female character of the Hindu epic Ramayana.

Laksmana (also known as Soumitri, Bharatanuja) is the younger brother and close companion of the god Rama. Lakshmana is specially attached to Rama and when Rama marries Sita, Lakshmana marries Sita's younger sister Urmila. Later, when Rama goes on exile for fourteen years on the insistence of Kaikeyi, Lakshmana leaves his wife Urmila and joins Rama.

Urmila is one of the major characters in the Hindu epic Ramayana. She was the daughter of King Janaka of Mithila and Queen Sunayana and the younger sister of Sita. She was the wife of Lakshmana. When Lakshmana had to go with Rama, Urmila asked Nidra, the goddess of sleep, to take away all of Lakshmana's sleep for the fourteen years of exile, so that he could remain awake and ever attentive to Rama and Sita's needs. She remained asleep throughout the fourteen years, waking up to see Rama's coronation when Lakshmana returned to Ayodhya and relieves her of her duties.

Bharata in the Hindu epic Ramayana was the brother of the protagonist Rama and the second son of Dasharatha and only son of Kaikeyi. Dasharatha was the emperor of Ayodhya and belonged to the Suryavansha or Solar Dynasty. It is said that after Rama, he was the symbol of dharma and idealism. A few commentators, however, deem Bharata to be even greater than Rama himself in virtue.

In the Hindu epic Ramayana, Mandavi was the daughter of Kushadhwaja, a brother of King Janaka of Mithila and hence a cousin of Sita. She was the wife of Bharata, the younger brother of Lord Rama.When Sita went to exile with her husband Rama for 14 years,Bharata agreed to govern Ayodhya, not as its ruler, but as Rama's representative, placed Rama's sandals at the foot of the royal throne and neither sat upon the throne nor crowned himself and vowed to Rama that if Rama did not return immediately when the fourteen years elapsed, he would give his life up by immolation.Mandavi supported her husband's decision, became Sita's representative and didn't crowned or acknowledged herself as queen of Ayodhya and decided to take care of Kaikeyi and all her in laws.

Shatrughna was the youngest brother of Lord Rama in the Hindu epic Ramayana. He is the twin brother of Lakshmana. He always used to follow Rama. He really respected Rama. He was not only a brother but best friend also to Rama. Rama was very special to him.

In the Hindu epic Ramayana, Shrutakirti (Shrutkeerti) was the daughter of Kushadhwaja and his wife Chandrabhaga, a brother of King Janaka of Mithilā; hence, she is a cousin of Sita. Her name signifies "she whose fame is heard". Shrutakīrti was younger sister of Mandavi and cousin sister of Sita and Urmila,she was the youngest among all sisters and was adored by all sisters. Shrutakīrti was married to Shatrughna, the youngest brother of Lord Rāma. Dasharatha according to Ramayana is the king of krukshetra and a descendant of the Ikshvaku dynasty(also known as Suryavamsha or Raghuvamsa dynasty). His life story is narrated principally in the Hindu epic Ramayana. Dasharatha has three queen-consorts, namely, Kaushalya, Sumitra and Kaikeyi. Kaushalya was from the Kingdom of Magadha. Sumitra was from Kashi. Kaikeyi was from Kekeya Kingdom. Kausalya gave birth to Rama. Kaikeyi gave birth to Bharata. Sumitra gave birth to Lakshmana and Shatrughna. Janaka (also spelled Janak) is the name used to refer to the kings of Videha.The Janaka Dynasty ruled the Videha kingdom from their capital, Mithila. A certain King Janaka, who probably reigned during the 7th century BCE, is mentioned in the late Vedic literature as a great philosopher-king, He is also mentioned in the Ramayana epic. Spouse’s name Sunayana ( also Sunaina) and his childrens are Sita nd Urmila. His younger brother's name is Kushadhwaja (also known as Kushadbhojan). Kushadhwaja’s wife name Malavati (Chandrabhaga) and his children’s name are Mandavi and Shrutakirti. 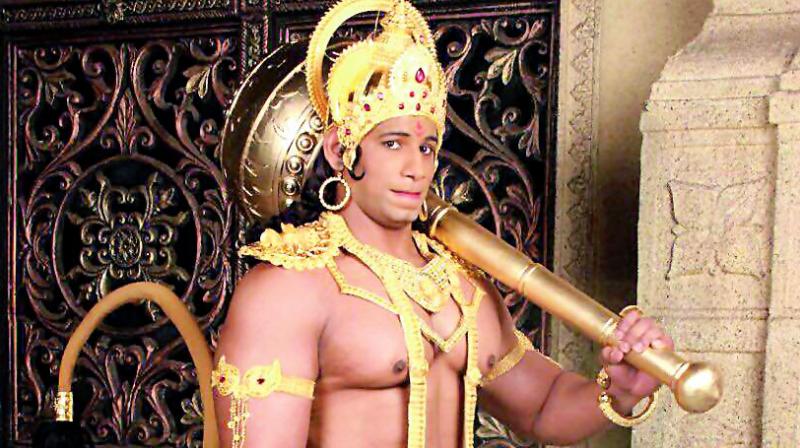 Lord Hanuman (also known as Mahavira,Bajrangbali) is a Hindu god and an ardent devotee of the god Rama. He is one of the central figures in the Hindu epic Ramayana. Hanuman’s image shows him as a strong man with the face of a monkey. He also has a tail. Lord Hanuman participated in Rama's war against the demon king Ravana. Several texts also present him as an incarnation of Lord Shiva. He is the son of Anjanaand Kesari, and is also described as the son of the wind-god Vayu, who according to several stories, played a role in his birth. Hanuman was awarded boon of Immortality by Sita.

Ravana is the mythical primary antagonist in the Hindu epic Ramayana, where he is depicted as the king of Lanka. Ravana is depicted and described as having ten heads and as a follower of Shiva, a great scholar, a capable ruler and a maestro of the veena, but someone who wished to overpower the Devas(Gods) . His ten heads represent his knowledge of the six shastras and the four Vedas. In the Ramayana, Ravana kidnaps Rama's wife Sita to exact vengeance on Rama and his brother Lakshmana for having cut off the nose of his sister Shurpanakha.

The Ramayana is one of the two great Indian epics, the other being the Mahabharata. The Ramayana tells about life in India around 1000 BCE and offers models in dharma. The hero, Rama, lived his whole life by the rules of dharma in fact that was why Indian consider him heroic. When Rama was a young boy, he was the perfect son. Later he was an ideal husband to his faithful wife, Sita, and a responsible ruler of Ayodhya. "Be as Rama," young Indians have been taught for 2,000 years; "Be as Sita."

The original Ramayana was a 24,000 couplet-long epic poem attributed to the Sanskrit poet Valmiki. Oral versions of Rama's story circulated for centuries, and the epic was probably first written down sometime around the start of the Common Era. It has since been told, retold, translated and transcreated throughout South and Southeast Asia, and the Ramayana continues to be performed in dance, drama, puppet shows, songs and movies all across Asia. From childhood most Indians learn the characters and incidents of these epics and they furnish the ideals and wisdom of common life. The epics help to bind together the many peoples of India, transcending caste, distance, and language. Two all-Indian holidays celebrate events in the Ramayana. Dussehra, a fourteen-day festival in October, commemorates the siege of Lanka and Rama's victory over Ravana, the demon king of Lanka. Divali, the October-November festival of Lights, celebrates Rama and Sita's return home to their kingdom of Ayodhya Prince Rama was the eldest of four sons and was to become king when his father retired from the ruling. His stepmother, however, wanted to see her son Bharata, Rama's younger brother, become king. Remembering that the king had once promised to grant her any two wishes she desired, she demanded that Rama is banished and Bharata is crowned. The king had to keep his word to his wife and ordered Rama's banishment. Rama accepted the decree unquestioningly. "I gladly obey father's command," he said to his stepmother. "Why, I would go even if you ordered it."

When Sita, Rama's wife, heard Rama was to be banished, she begged to accompany him to his forest retreat. "As shadow to substance, so wife to husband," she reminded Rama. "Is not the wife's dharma to be at her husband's side? Let me walk ahead of you so that I may smooth the path for your feet," she pleaded. Rama agreed, and Rama, Sita and his brother Lakshmana all went to the forest.

When Bharata learned what his mother had done, he sought Rama in the forest. "The eldest must rule," he reminded Rama. "Please come back and claim your rightful place as king." Rama refused to go against his father's command, so Bharata took his brother's sandals and said, "I shall place these sandals on the throne as symbols of your authority. I shall rule only as regent in your place, and each day I shall put my offerings at the feet of my Lord. When the fourteen years of banishment are over, I shall joyously return the kingdom to you." Rama was very impressed with Bharata's selflessness. As Bharata left, Rama said to him, "I should have known that you would renounce gladly what most men work lifetimes to learn to give up."

Later in the story, Ravana, the evil King of Lanka, (what is probably present-day Sri Lanka) abducted Sita. Rama mustered the aid of a money army, built a causeway across to Lanka, released Sita and brought her safely back to Ayodhya. In order to set a good example, however, Rama demanded that Sita proves her purity before he could take her back as his wife. Rama, Sita, and Bharata are all examples of persons following their dharma.

This lesson focuses on how the Ramayana teaches Indians to perform their dharma. Encourage students to pick out examples of characters in the epic who were faithful to their dharma and those who violated their dharma. Mahatma Gandhi dreamed that one day modern India would become a Ram-rajya.

Here's how you can make bold and italic text.